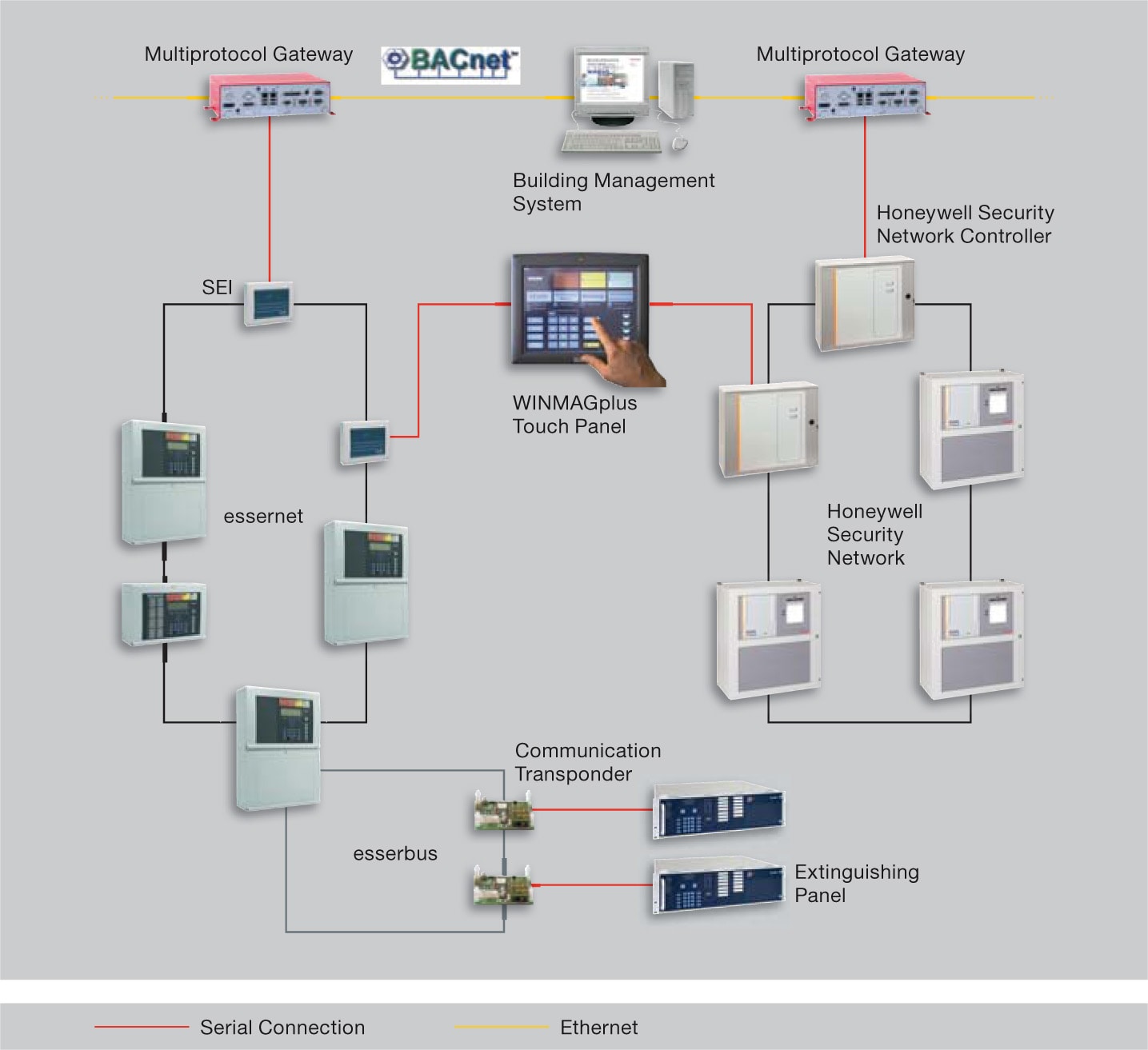 It often happens within complex, technical building networks that a transfer of data to overriding locations becomes necessary. Up until now, the WINMAGplus was applied as a protocol converter where an essernet was used. The Multiprotocol Gateway (MPG) now offers a cost-effective alternative to this possibility. The combination of hardware and software with permanent standard protocols is advantageous in that a predefined number of detection points is already included and a corresponding bundle is significantly more cost effective when compared to the WINMAGplus since the detection points were previously calculated separately. Another cost advantage of the Multiprotocol Gateway compared to the WINMAGplus solution is that the investments for PC hardware and Windows XP operation system are not necessary. The Multiprotocol Gateway provides the conversion of essernet data protocols to standard software protocols for the communication with overriding building services management systems as well as devices from other manufacturers. The planning of the data points is carried out on the basis of text files per protocol driver. A connection of two data points is defined in a further text file via information of source and destination. The mapping of the data points is carried out on the basis of analog and/or binary actual values and projected values. The basic configuration is carried out through simple reading of the project data from the tools 8000 programming software and conversion of the editable project data into data objects of the respective target protocol. Here, the alarm, fault and disconnection states are each considered to Multiprotocol Gateway Universal protocol converter for connection to building services management system be one information point the status of which can be transmitted via the selected protocol per detection point. It is easily possible to edit the list of detection points during the planning. Since it is often the case that not all the information of the fire detection net should be transmitted to the overriding control system, the number of data points being transmitted via the gateway can be reduced to the desired amount in this way. Web server integrated. The gateway has an access protected Web user interface with its own user administration. In this way, the following are possible: Remote diagnostics and the status inquiry of all data points. Switching over the gateway without additional software is also possible when using the corresponding ESSER modules. The number of supported data points extends up to 35,000, and with a corresponding calculation algorithm it can be assessed how many ESSER detector points (e.g. fire detectors) can be realized as indicating or switching/indicating. Connection of the Multiprotocol Gateway is easily carried out using a serial essernet interface (SEI). In this way a trouble-free integration is possible in existing projects where an essernet is already provided. BACnet, OPC and Modbus IP are among the most important protocols over which it is now possible to transmit essernet information.
For further information, please check our website: www.esser-systems.com.