Ever since the killing spree in Winneden, Baden-Wuerttemberg (Germany), school safety has become a dominant topic everywhere in the media and continues to hold public interest. The suggestions made in roundtable discussions range from further tightening of the firearms law to arms controls and police forces at school entrances. The firearms laws had already been revised after a rampage at a high school in Erfurt in 2002. The German Bundestag is debating whether to extend emergency alarm plans in schools. Can acts of violence such as the one at Winneden Realschule be prevented in the future? It cannot and will not be possible to provide complete protection. However, a major role can be played by violence prevention, which should be made a general rule. Various ways of how pupils could treat each other with more respect are being discussed at school conferences. Unfortunately, this still cannot prevent the actions of one crazy person. It is a fact, however, that there is potential for improvement and that precautions will have to be taken in order to be able to initiate corresponding measures in an emergency. Initial efforts are already in motion.

Taking the sad and inexplicable actions of this seventeen-year-old pupil into consideration, many cities have already developed emergency plans which they then distributed to the relevant facilities. These plans are already being displayed in many classrooms. They indicate the appropriate behavior in an emergency. An example of one tactic is never to trigger the fire alarm, which would in turn cause pupils to run outside. Pupils and teachers should instead barricade themselves into the classrooms and remain calm.

It is impossible to state that scenarios such as those in Erfurt or Winneden could not occur at other schools. Of course there are often alarm plans for cases of emergency and it may be that the teaching staff has been trained on how to behave in the case of such a tragic event; yet a certain degree of danger is always present. Some facilities have prepared themselves for this and have created the possibility of triggering an alarm via manual call points placed in strategic locations.

Such installations are of special interest now since many schools are currently upgrading to optimized fire protection. It would be quite easy to consider the possibility of also installing a device for triggering a possible “rampage alarm” during this upgrading procedure. Products ideally suitable for this are those which are equipped with an alarm in addition to their normal operation of detecting fires. With the innovative ESSER IQ8Quad fire detector, an optical flashing light, an acoustic alarm as well as a voice alarm could additionally be integrated in one housing no bigger than a normal detector. The supplementary option of wireless operation significantly simplifies the subsequent integration into already present installations. With this detector model, voice announcements can be combined in different languages (e.g. German, French, Spanish, English and Italian). The programming of individual texts on demand is optional. The so-called softstart mode allows for a slow, successive increase of the acoustic signal’s volume in certain specified areas during the first phase.

Scientific studies show that people rarely react to abstract alarm sounds or to purely optical signals in emergencies; they do, however, act quickly and correctly if they get clear voice instructions. The IQ8Quad thus enables a targeted evacuation – simultaneous with the alarm. By having one detector successively issue the announcements in five different languages, it is also possible to reliably alert international visitors in the building and lead them out of the dangerous area.

To increase the security level at schools, forethought by those responsible (concerning special building directives and school construction guidelines) is necessary: professional measures for optimal fire protection, voice alarm, evacuation and rampage alarm can be taken into consideration in the planning phase of such future installations. 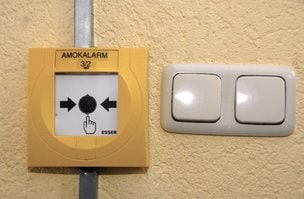