Voice alarm at the underground station Marienplatz in Munich/Germany 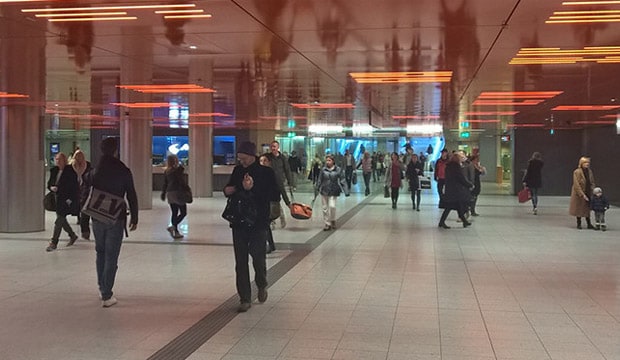 The Marienplatz station, designed by the architect Alexander von Branca, is the most important and most used station in the entire Munich underground network. It is where the busy U3 and U6 lines cross the main S-Bahn line. The station provides access to the most important part of the Old Town and the pedestrian zone with its shops and numerous tourist attractions such as the Frauenkirche, the New City Hall (directly above the underground station) or Viktualienmarkt.

On 26 October 2015, after more than 3 years of construction, the modernised mezzanine floor at Marienplatz underground station was opened. Lord Mayor Dieter Reiter and Herbert König, head of the Munich transport company, were also present at this event. Since then, the underground railway in the heart of the city shines in new splendour.

The specialist installation company Elektro Zausinger, based in Munich, was entrusted with the installation of the voice alarm systems (PA/VA). Zausinger used - as they have done for years - the sophisticated and professional products of the Neuss-based manufacturer Novar. The preliminary planning work was carried out in cooperation with the Silberbauer planning office from Traunstein, which is currently also involved in the planning for the PA/VA in the Sendlinger Tor underground station in Munich.

The PA/VA at Marienplatz was realized by means of two redundant systems, which provide a total of 12 audio inputs, whereby a separate music input is possible and can thus be used optimally for sound reinforcement. Six DOM 4/24, ten amplifiers with 2×500 watts, six UIM, two SCUs, two UPS-PSU-4s and twelve 150 Ah batteries complete the portfolio of installed technical components. A connection to the Public Address system for the platforms and to the control center via fiber optic cable (FO) was also implemented.

As early as 2011, a professional sound reinforcement system with VARIODYN components was commissioned at Munich's main station, thus heralding the "hi-fi age" at the station there. If you want to know more, you can read the article of the trade magazine "Professional System".