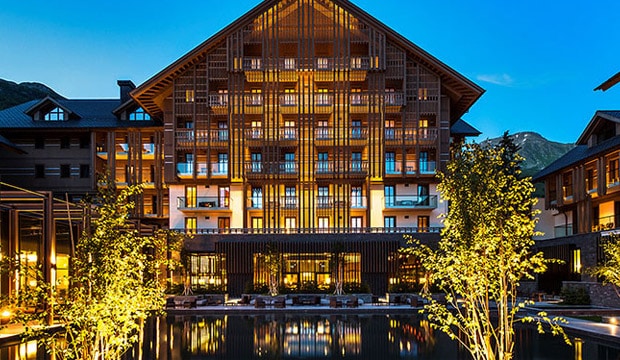 Since its grand opening in December 2013, "The Chedi Andermatt" has enjoyed increasing popularity. The five-star deluxe hotel received the "GaultMillau Hotel of the Year" award in 2017. In addition to great attention to detail, great importance was attached to protecting the luxury resort in a special way against fire hazards.

Alpine, Asian, different. The Chedi Andermatt seduces with its otherness, the unusual combination of Alpine chic and Asian expression. Perfect harmony, as only a star architect like Jean-Michel Gathy can achieve. In the heart of the Swiss Alps, at 1,447 metres above sea level, a five-star deluxe hotel enchants its guests.

However, despite all the sense of beauty, the safety aspect must not be ignored. Great importance was attached to protecting the luxury resort in a special way against fire hazards. The implementation of this complex task was undertaken by the renowned building technology expert Alpiq InTec Schweiz AG, headquartered in Zurich/Switzerland. Novar's long-standing partner company has extensive know-how in the security sector. For this project, the security specialists from Alpiq InTec used products from the traditional ESSER brand. In the first expansion stage, a large number of fire detector variants were installed - due to the different requirements and environmental parameters - ranging from manual fire detectors and multi-sensor detectors to multifunctional fire detectors with integrated alarm transmitters. The almost 2,500 peripheral elements are distributed over 39 loops connected to 6 Fire Alarm Control Panels. O²T detectors were used in the area of the underground car parks. This detector type works according to the optical scattered light principle with two different measuring angles and offers two decisive advantages: It significantly increases safety in the detection of fire smoke and at the same time greatly reduces the false alarm rate, as it can reliably distinguish fire smoke from other types of smoke. The lowest possible false alarm rate of the installed fire protection system is an essential aspect for hotel operators to avoid the false alarms and the associated deployment of the fire brigade. By means of the differentiated observation and evaluation of different smoke particles, the O²T detector detects disturbance variables such as water vapour, which can occur in hotel rooms during extensive showering, or exhaust fumes from vehicles, which are often found in underground car parks.

More than just a fire detector

For their own business interests alone, hoteliers attach importance to reliable fire protection measures that protect against extensive consequential damage. The increasing internationalisation of guest structures not only leads to adaptation to higher international safety standards, it also causes a change in the requirements for modern alarm systems. Against this background, the IQ8Quad was developed; it is the only fire detector in the world that, in addition to detection, combines the optical function of a flashing light, the acoustic alarm of a warning buzzer and that of a multilingual voice alarm in a single housing. In an emergency, people rarely react to abstract alarm sounds, but act quickly and correctly with clear voice instructions. With IQ8Quad, targeted evacuation can begin at the same time as the alarm is triggered. Thanks to the possibility of outputting the announcements per detector one after the other in five different languages, international visitors to a building - as is the case in international hotels - can also be reliably alerted and guided out of the danger zone. "In our hotel, we not only attach great importance to an exclusive ambience and extraordinary design. The security technology must also meet the highest standards," says Christian Simmen, Director of Engineering The Chedi Andermatt. Michele Waldeck, Head of Security at Alpiq, the company commissioned with the installation, concludes: "It's a reassuring feeling to be able to sit back and relax in the knowledge that the complex technology will ensure smooth operation and, in the event of an incident, the necessary safety for employees and hotel guests is guaranteed.

The article was published in the Swiss trade publication SicherheitsForum issue 2/2018.