In a very famous country...Fantastic fire protection in the amusement park Phantasialand-Brühl/Germany 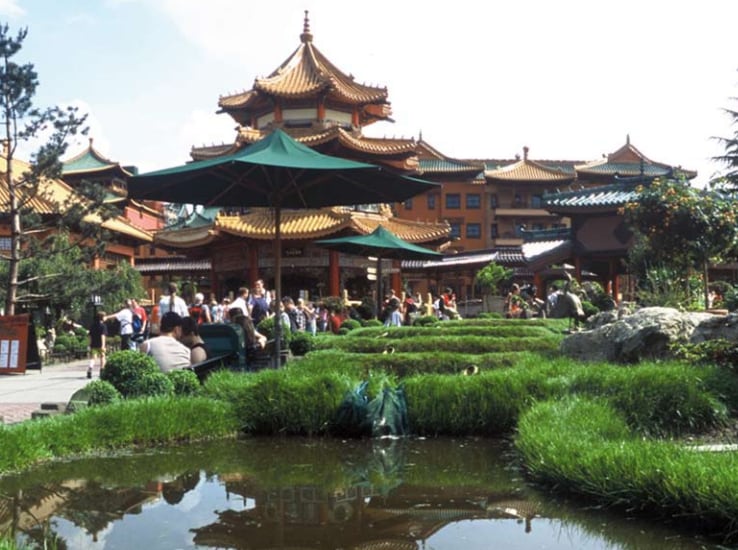 Who does not know it - the saying one of the most famous scientists of all time. "Imagination is more important than knowledge, because knowledge is limited". This aphorism of Albert Einstein likes one or the other on all sorts of philosophical considerations seduce. What about Fantasy so everything is moved 280,000, among other things, shows a Square meter large area in Brühl, Phantasialand.

Since its opening in 1967, Phantasialand about two million per year. Visitors in the amusement park. From White water spectacles about different roller coasters and breathtaking Shows are a lot of variety guaranteed. One day is not enough to the many attractions of the and experience shows. This circumstance finally led to the idea, on the numerous inquiries of many visitors to react and create a parking-owned Hotel. What was the opportunity better than the existing ones, with the culture medal of Taipei awarded area "China Town" and to build a theme hotel to build.

With a lot of love for detail was created on this way two years ago an adventure hotel in the Far Eastern style, which is is unique of its kind in Europe. Architecturally similar to the Chinese the imperial era, today it is the largest Chinese building outside of the People's Republic. The planning phase started already in summer 1999 and extended, with some interruptions, for almost a year and a half.

About the special appearance of the new hotel one was quickly becomes clear: externally, you should it in the style of the Quing dynasty of 17th and 18th century be. The interior design was found to be in the building tradition of the Jiangtse region to the desired closeness to nature. The Outside is the gardens of Suzhouse, the "Venice of the East".

To make the Chinese architectural style true to the original to realize, studied in China, the diversified variety of the Far Eastern architecture, to be used in conjunction with Western engineers. Standards Design ideas for the hotel. With the Organisation and procurement of the innumerable handcrafted components a Chinese company commissioned for the roof construction, the decorations, the interior fittings and the layout of the garden was. About 900 experts alone in the People's Republic and another 130 during the construction phase at Phantasialand living Chinese workers, Artists and architects were involved with the construction of the theme hotel. Remarkable are among others the complex wooden constructions, the mortised and toothed - without one piece iron were processed and a special Certificate of Asian craftsmanship represent.

A hotel full of fantasy

In the hotel opened at the beginning of July 2003 Phantasia was not only valued on authenticity. Also the feeling of well-being was capitalized and the Four-star address therefore according to Feng-

Shui laws established. In a U-shape the four hotel buildings are grouped together around the garden, which with its rice terraces, bonsai trees, camellias and other Chinese plants a place of peace and comfort is. The building a floor area of 5,800 m² floor space and offers 140 comfortable Family room, 25 double rooms and 13 suites in different Sizes. In addition the Hotel open all year round over three spacious conference rooms with the most modern Conference equipment for up to 120 People. The equivalent of 11 million Euro investment costs have obviously been worthwhile: Already in

August 2003, one month after the opening, was able to achieve a 100% capacity utilization recorded over several weeks will be.

When it came time to remove this object of prestige to be secured in terms of fire protection, it did not require a long discussions. The client, the Phantasialand Schmidt-Löffelhardt GmbH & Co.KG, decided to give the installation of the fire alarm system in proven hands. Because of the long and successful cooperation with the company TELBA, the decision was made in favour of this ESSER partner. TELBA had already previously the fire protection facilities in the Park on the latest state of the art and as a system partner of the European market leader Novar GmbH the products of the brand ESSER installed. In the hotel itself, first different early fire detection devices installed. Next to 749 automatic smoke detectors offer 33 manually triggered push-button detectors the possibility of immediate alert the fire department. Several sirens sound in case of a necessary evacuation clearly audible alarm. In order, to achieve the highest possible unobtrusive security standard, seven linear heat detector LHD 4 has been installed in the area of of the attic floor additionally.

All around thrill with the highest safety standard

The fire protection equipment extend over the entire amusement park. Unbelievable, what could happen if in the "conurbations" of the theme park panic would break out. To to prevent this and to avoid any fire hazard to nip it in the bud, has been identified at all major "hot spots" precautionary measures taken. The Westerncity is equipped with 290 automatic smoke and 45 push-button detectors. A special challenge was in the area of Western saloons, since here with different types of "Fogging". In order to achieve an error-free fire detection, the partner decided LRS compact smoke aspiration systems and ARS70-2 instead instead of conventional automatic smoke detector. Also the visitor magnet known as whitewater course - like many other attractions - are secured with various smoke and Push buttons. To avoid any disturbance of the public, the necessary assembly work had to be carried out partly also outside the opening hours, i.e. in the evening or at night.

After completion of all assembly work was certain: The guests in the Phantasialand are offered the highest comfort and even the highest safety standard.

The article was published in the ESSER Newsletter issue 2/2005.